Have you ever just wanted to do things for no godforsaken reason? Just be a total butthole because you can? “Untitled Goose Game” is that game. It is pure joy wrapped up in the form of a goose wreaking havoc on a small community. If anyone has been in the presence of geese, you know they are the ‘cats’ of the bird world. Sassy, large, floating devices that make you want to malfunction in extreme anger.

“Untitled Goose Game” was developed by House House, produced by Panic. This strategic puzzle game forces you to use your stealthy goose brains to just be plain annoying to the villagers of your town. Everyone hates you! Everyone is out to get you. They are not your friends and not easily persuaded by your “innocence”. I spent many times just staring at the villagers, “acting” like I was just hanging out, then I would strike and fool them all!

This game made me so happy! I could not stop laughing when I would just go up to a villager, stare at them, then take whatever they were holding and run away. The Gardener was probably the funniest villager to fake out. Although, they all were very amusing to piss off.

Apparently, the idea for this game came from an employee at House House sending out a picture of a goose to the team. This sparked a conversation about geese and then the idea for a game. The inspiration for the stealthy, comical gameplay derived from the influences of Hitman and Super Mario 64.

When you think about it, they were absolute geniuses for this creation in its originality. They designed a walkthrough game where you bother townspeople in the simplest form which then creates pure happiness and fun. Let’s face it, we all like to annoy people in our own way and this lets us annoy a ton of people without actually having to get yelled at or hurt someone’s feelings. 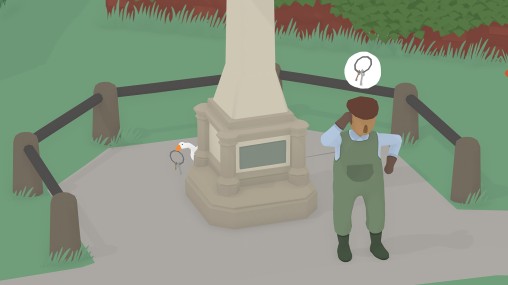 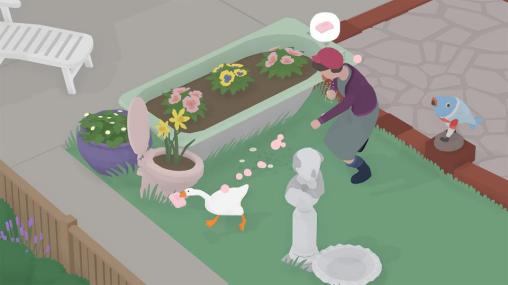 You are a white goose in an English town. Your business there, to strictly bother the villagers. You have a checklist of bothersome activities to complete throughout the town in order to complete the game. More sinister activities are added onto your list when you complete the first tasks and when you get to the end of the game.

Being the annoying goose that you are, your abilities include goosely things such as honking, flapping your wings, snatching things with your beak, swimming and running.

(I’ve got to say, the music while you run is the most hilarious part! No lie, I would make villagers chase me just so I could hear the intense anxious music crescendo into a marvelous goofy chase scene.)

There are multiple areas of the town to explore, creating many different ways to bother the villagers. House House did a great job of designing many different tasks for you to complete in these sections to give us a variety of goosely mischief. The changing scenarios make the game more exciting and challenging as you waddle through the town. I was very pleased with the types of townspeople I ran into and the environments in which I got to release my goosey sabotage.

This game was well worth the purchase for a good laugh. My only con about this game was that I wish it would have been longer!

The gameplay is rather short. It definitely got me hooked to the point where I didn’t want to put it down. I got to the end and was like  “WHAT? NO!!?!” I would love to see an extension or some DLC for this game because I will always come back to this masterpiece for a good belly laugh.

I loved the design of the game as well. That paper cartoony, simple design that made your actions ever so more intriguing. Since you didn’t have to pay attention and be blown away by the surroundings and the talents of the developers’ skills for game content creation, you could focus on the mission at hand, being a ridiculously silly, bastard goose.

Vandalising has never been so fun!

Become the goose that you were meant to be. Annoy the piss out of everyone!

View all posts by Hannah

uncaptblog.wordpress.com/
This is art, not real life.

My gaming thoughts and meanderings for you to judge!

The best of overlooked and underappreciated computer and video games, from yesterday and today